Embellish, copy, plagiarize: Three steps to fake it like a pro on LinkedIn

LinkedIn has a Fakefluencer problem; here are the methods and some examples

Back in 2016, posts on LinkedIn generated over 9 billion page impressions. Per week. In the four years since, that number figures to have increased. And with growing reach, people are clamoring to get a slice of the reach pie—with some resorting to unclean means. By embellishing half-truths, copying viral posts and brazenly plagiarizing others, they are able to generate a massive amount of reach and engagement. OMR waded through the LinkedIn murk of shady business “professionals” to uncover the most widespread (and successful) sketchy methods and found some head-scratching examples.

400,000 views and 2000 followers in a week—that’s the success a self-dubbed “Growth Hacker” touted back in a Facebook group. To verify the claim, “Growth Hacker” also posted a handful of screenshots to the group, in which 11,000 members share tips and tricks for generating reach on LinkedIn. The screens purport to show just how many views the respective posts generated, i.e. how many times the posts appeared in the feeds of other LinkedIn users. 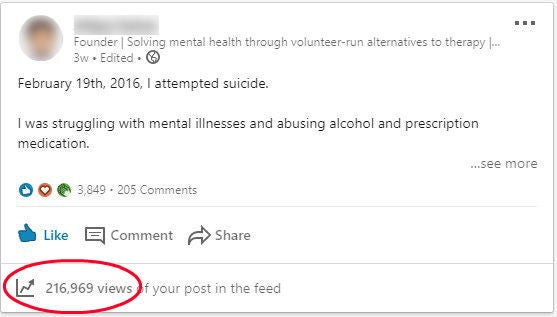 More than 200,000 views with a single post: This screenshot is the proof offered up by one “Growth Hacker” that their strategy is successful (Screenshot edited and anonymized by OMR)

While it’s impossible to say that the screenshots of the Linkedin post are genuine and not doctored, “Growth Hacker” did, however, create and share a “Case Study” in the aforementioned Facebook group and even linked the posts in question. They boast incredible engagement stats, reactions in the 4-figure range and comments in the hundreds. They make his claims credible.

But what is the secret to “Growth Hacker’s” success? “Whole-heartedly embrace LinkedIn is fake.” The author says that while “people might tell you that they love vulnerable or honest content,” the truth is an entirely different matter. What they want is for “you to be selectively vulnerable. On social media, people want you to use pain or a story as a gateway to hope, inspiration, and faith. So, when you’re leveraging vulnerability, you need to end it on an arc. I call this faux-vulnerability.” 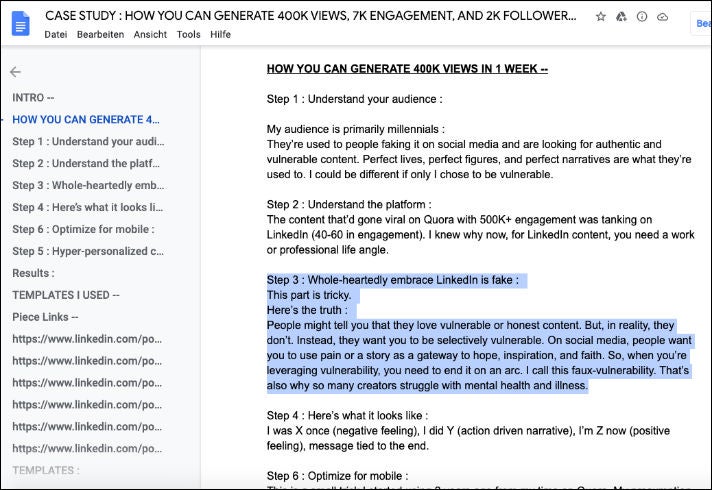 A screenshot of the “Case Study” document, in which “Growth Hacker” provides their playbook on how to generate massive reach with viral posts on LinkedIn (Paragraph highlighted by OMR)

A bowl of tears to go with that cheese?

The Linkedin posts that “Growth Hacker” listed as examples of successfully implementing their strategy are dripping in cruel twists of fate and pathos: They repeatedly write about an attempted suicide years ago, bouts with depression, corona-induced financial struggles and failures at university. The posts are always optimized for mobile, aka “one sentence per paragraph,” and always end with a positive note phrased in a way that would make the cheesiest Hallmark card proud: “If you’re there today, remember to not lose hope. No one’s beyond redemption. Not even a lonely drunk who tried to kill himself.” 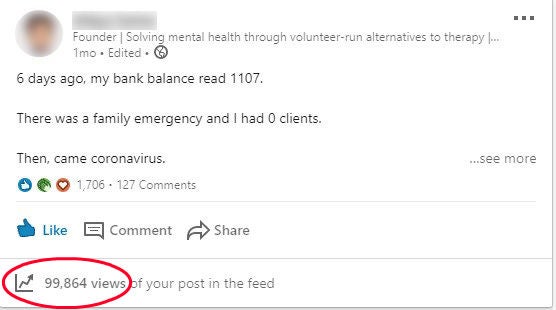 Financial hardship, self doubt, depression. The playbook for “Growth Hacker” starts with opening up about personal struggles (Screenshot anonymized by OMR)

As with the screenshots, it’s impossible to tell if posts really did generate the performance “Growth Hacker” claims. Users who commented on the posts seem to believe the stories: “Inspirational!,” “It’s important that we don’t give up on ourselves!” and the like are par for the course. The screenshots show that one post generated views in the 4-figure range. The majority, however, were in the 5-figure range, while one had over 200K views. “Growth Hacker” claims to have gotten the engagement without resorting to any tricks, like pods (“If you like my post, I’ll like your group,” etc.).

US comedian John Hickey collects and posts a greatest hits of fails on the platform to his “Best of LinkedIn” Twitter account. The (anonymized) screenshots show what he considers to be a special brand of cringy, embarrassing posts deserving of a solid skewering and provide him a vehicle with which to take aim at the platform’s culture at large. “It’s insulated circles of people patting each other on the back, and it goes around and around and around,” Hickey told the New York Times of LinkedIn culture back in August 2019.

One of the pillars of Hickey’s bit is that the bulk of the posts he publishes are fabricated entirely. One particular beloved trope is where an author posts an emotional/inspirational experience made with their child. At its crux, it goes like this: Parent wakes up to find a letter on his or her desk or reads a paragraph they wrote in school about their parents, in which the kids talk about the “one time daddy gave a crying homeless man $50” or “We had to leave because of coronavirus,” which mom and pop spin into daily inspiration fit for a cringe. Hickey awards such nuggets the #MadeUpKidMonday hashtag, which has become a fave for other Twitter users.

Another ploy aspiring “LinkedIn-fluencers” use to grab some reach is to simply copy, verbatim, viral posts by other users. In the past, LinkenIn has had an issue with seedy “business influencers,” who reposted viral videos as their own and reeped a massive amount of reach on the platform (“Our German colleagues reported on the phenmomenon back in 2018”). Now, it’s primarily text posts that are being ripped off and reposted for reach.

About nine months ago, the founder of the “Growth Academy” posted the above trope. In it, the applicant (gender unknown) was on time, well-dressed, prepared, interested and attentive, and it ends with the inspirational call-to-action: “Be the person that gives someone the chance they’ve been waiting for—Be a leader that creates leaders.” The anecdotal retelling has notched over 235,000 reactions and 5400 comments. If you take into account that Linkedin posts that generated reactions in the 5-figure range and comments in the hundreds have had views numbering in the seven figures (example in German), there is reason to believe that the Gen-Z applicant anecdote has had views somewhere in the 8-figure range.

Tens of thousands of reactions with pilfered posts

Other users were apparently so “inspired” by just how viral the anecdote went that they just lifted the text and posted it themselves, in the hopes of getting some virality of their own. If you search for the first sentence in LinkendIn, you’ll find 60 posts (as of writing) with direct hits; many with an unaltered text. In fairness, some do include #copied or “Repost” at the end of the post, even though LinkendIn has a share button for reposts. But shared posts have less reach potential than original posts.

For the founder of US fitness drink company, who marked her post with #repost, the ploy worked to the tune of 8300+ reactions and nearly 500 comments. Incredibly, the original author also reposted her own post five times—each time with varying degrees of success: reactions between 4 and 5-figures and comments in the 3 to 4-figure range.

770,000 reactions with a chummy anecdote

The degree and scope of plagiarism with viral posts on Linkedin does not stop there. The majority of the rest consist of posts about life at work and, more specifically, applications, interviews and new hires. Just a couple of weeks ago, “Best of LinkedIn” posted screenshots from four different users who posted the same text. Another anecdote about an apparent applicant, who, this time around, did not present themselves professionally per Skype. Kids making noise in the background, wifey yapping in the background. The story concludes with the applicant bursting out into tears after getting the job despite it all and the post ends with the proverbial “I learned long ago never to pass quick judgment on others” moral of the story.

The original anecdote stems from an app and web developer from Toronto who got approximately 770,000 reactions and more than 33,000 comments on the original. If you search for the opening line, (“I interviewed a candidate through Skype last week”), you’ll get a bunch of hits here too. Several have since been deleted, but generated reactions and comments in the 5 and 4-figure ranges respectively before being culled. Currently, the LinkedIn search will net you more than 200 hits with the exact same or a very similar opening line, some of which have comments in the hundreds and reactions in the thousands.

Sub Ferrari for Tesla and you’ve authored something original!

A couple of weeks back Liz Willits (“The #1 marketer to follow on LinkedIn”), vented her frustration about her viral post being copied by several users and that “plagiarism is COMMON on this platform.” Willits parodied the gist of the majority of copied Linkedin posts: “I got fired from my job. It was the best thing that ever happened to me. Now, I’m a 29-year-old millionaire with 4 Teslas and 3 houses. Sounds too good to be true? It is. I made it all up! Don’t envy people on social media. They tend to exaggerate their success.”

With almost 85,000 reactions and 2300 comments, Willit’s post became a small viral hit. Apparently, the majority of the plagiarized posts have been deleted. Willits said she wrote several of the plagiarizers: one didn’t know plagiarizing was wrong and another blocked her she said, the latter’s post is still up (400 reactions and 50 comments). The plagiarized went deep into his or her bag of tricks to protect themselves from the accusations of plagiarism: they changed the age and the make of the car.