Up to 150,000 new people sign up for the Finanztip newsletter each and every quarter. And it has now become the largest journalistic newsletter in Germany. We spoke with the braintrust behind Finanztip to discuss the growth hacks they used for this unprecedented success—and to find out where they go from here.

When we asked Hermann-Josef Tenhagen what the first major growth lever was for the Finanztip newsletter, he immediately comes up with a cumbersome and rather ugly term: loan processing fees. Not some catchy advertising slogan. Not any particularly clever or expensive marketing campaign. Rather the case file numbers Az. XI ZR 170/13 and XI ZR 405/12. In 2014, the German Supreme Court shuts down such processing fees—common practice for banks at the time—declaring them illegal. Tens of thousands of people in Germany were suddenly able to demand money bank from banks—and Finanztip had a clever solution that made it easy for them to get their cash back.

“Anyone who subscribed to our newsletter at the time received a sample letter free of charge with it. In that quarter alone, we added 35,000 new subscribers at the time,” says Hermann-Josef Tenhagen, editor-in-chief at Finanztip. Tenhagen says you have to be so relevant on individual topics so that there’s no avoiding you. Eight years later, Finanztip’s newsletter has north of one million subscribers. No other journalistic newsletter product is likely to come close in terms of reach.

Finanztip was founded by Marcus Wolsdorf and Robert Haselsteiner. The two met during their time at the investment bank Goldman Sachs. In 1999, they founded the online mortgage broker Interhyp, later taking it public, before the company was then sold to the Dutch bank ING in 2008. In 2013, they withdrew from the business—and founded Finanztip. For it they took over an existing domain—and managed to convince Germany’s most-widely read consumer journalist, Hermann-Josef Tenhagen, to come on board.

Marcus Wolsdorf once said that they had seen how people repeatedly made the wrong decisions when it came to finance. “What was incredibly upsetting to us was that product providers exploit this ignorance repeatedly,” he said, describing the impetus to build a platform that provides individuals help and clarity for precisely such instances. Finanztip was therefore founded as a non-profit company; today the company is set up in a foundation in the name of the two founders, as they wanted the ensure that the profits stay with the company for the long term.

From Stiftung Warentest to newcomer Finanztip

Tenhagen’s move on October 1, 2014, sent shockwaves through the industry. Until then he had been editor-in-chief of Finanztest magazine, a part of Stiftung Warentest, Germany’s leading consumer comparison portal. At that time, the magazine still had a circulation of around 230,000. Finanztip.de, in contrast, was a niche blog operated for years by a single Hamburg entrepreneur before the Interhyp founders took it over. It’s akin to the head coach of Bayern Munich coaching some local rec team. 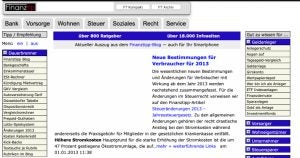 The Finanztip.de site before it was taken over by the Interhyp founders. Photo: Screenshot

But Tenhagen was attracted by the prospect of building up a digital portal with Finanztip—and being able to make the content available to users free of charge: “Finanztip is designed to help smaller players and individuals,” is how he explained his move at the time. The portal has been financed by revenues from affiliate links from the beginning. There are no subscriptions, as with the Stiftung Warentest, nor are there advertisements, as on other journalistic outlets. Finanztip basically runs as follows: The editorial staff researches a topic and then publishes an article with recommendations, for example, on the best providers of checking accounts. After publication, the affiliate department then approaches banks, insurance companies and the like and asks whether they want to be linked. If users then click on the link, Finanztip receives a small commission.

The model is intended to ensure journalistic independence on the one hand, but also to offer a viable business model on the other. So far, the plan is working. According to the Federal Gazette (Bundesanzeiger), Finanztip was able to generate EUR 2.5m in profit for 2020 alone, with annual sales ranging from six to seven million. The company says revenue was exceptionally high this year because many people wanted to get in on the stock market boom at the beginning of the pandemic and searched for the relevant articles (and providers) on Finanztip. However, the company was also clearly in the black before the outbreak of the pandemic, with a profit of around EUR 936,000 in 2019.

“Our content is now accessed 60 million times a year,” says Hermann-Josef Tenhagen. One reason for the success is the 60-member team charged with optimizing the platform’s articles for Google’s search results and updates them continuously. Another is that Finanztip has also built up a large reach in social media and with its newsletter in recent years, which repeatedly drive eyes to the pages, but have also been more than merely a marketing device.

Takeaways from the success of the Finanztip newsletter

The secret behind the newsletter’s success in terms of reach is first and foremost its content. From savings tips of the week to advice on how to negotiate more net income with alternatives to a salary increase, everything is included and relevant for many people. Despite the enormous growth in recent years, the newsletter’s opening rate is consistently between 37 and 39 percent, according to internal figures. In year and a half alone, somewhere between 50,000 and 150,000 people have registered for the newsletter every quarter—and even this figure has grown consistently in the past years. “Fuel complaints, flight delays or now property tax – there is at least one major topic every year that helps drive growth considerably,” says Hermann-Josef Tenhagen. 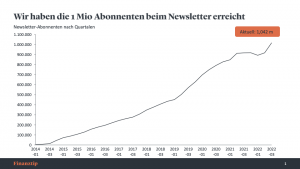 Development of subscribers to the Finanztip newsletter. Graphic: Finanztip

After the initial success with the sample letter regarding loan processing fees, Finanztip changed the way it sends out its newsletter. Since January 1, 2015, it has been published weekly, always on Fridays. “This regularity helps a lot,” says the editor-in-chief. New subscribers would become aware of the offer through references in texts. While it works quite well, there is room from improvement, says Tenhagen. It is much more effective, he says, to offer an extra that is only available with the newsletter. In marketing parlance: offer freebies. These are methods from the marketing toolbox that Finanztip combines with the high relevance of its own content much better than many other media companies.

The team is equally successful among men and women, with equal shares drawn to the newsletter. According to Finanztip, the proportion of female subscribers is around 50 percent, while the gender distribution on social networks is more different. For example, the proportion of men among viewers on YouTube is 85 percent, according to Finanztip. It is also the channel where Finanztip has built up its largest online following, with around 387,000 subscribers.

At this place you will find external content of Anbieter, which completes the article. You can view it with one click.

And while Hermann-Josef Tenhagen ensures the necessary awareness in the political and journalistic space with, among other things, a column on the online edition of Der Spiegel, Saidi Sulilatu is the face on social. Sulilatu used to work as a financial advisor and is now a member of the Finanztip management team. He answers questions in an easy-to-understand manner on YouTube about whether it makes more sense to buy or rent (two million views), whether it will still be worth buying photovoltaic panels in 2022 (1.3 million views), or what 20 well-paid jobs there are that don’t make you sick (just under one million views). On Tiktok, on the other hand, he is now also supported by younger colleagues. “Of course, we try to show age-appropriate faces on our social media channels,” he says: “And of course we want to show that we’re not a one-man show.”

In the future, Finanztip seeks to continue its growth track record and go beyond with its own app. So far, the app has been downloaded 140,000 times. “We introduced the app to reach target groups for whom email is perhaps no longer the number one means of communication,” says Saidi Sulilatu. In the coming years, the offer is to be expanded even more.

Other offerings are not in the works at present. “We discuss about once a year whether we should also offer coaching or individual counseling,” says Saidi Sulilatu. He used to do something like that himself and has a lot of fun with it. “But the effort is considerable. We would have to build up a relatively large team, and at the same time the offer should be as inexpensive as possible. At the moment, the company prefers to concentrate on increasing the number of do-it-yourselfers in general. “90 percent of Germans do not need investment advice from insurance companies and banks, but could do it themselves. So there’s still plenty of growth potential there.”